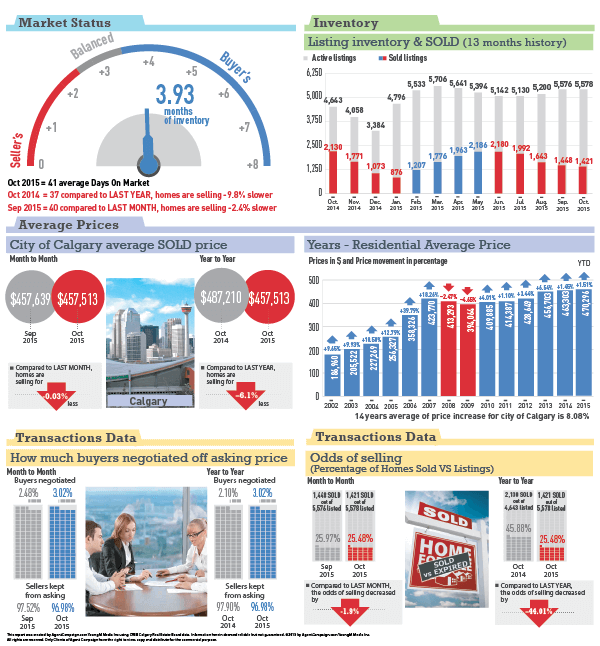 The prices, for two consecutive months now, has dropped

“In addition, new listings did not decline enough to prevent inventory gains and, ultimately, price contractions.”

The steepest declines occurred in the apartment sector, where the benchmark price fell to $288,300, a 0.8 per cent decline from September and nearly four per cent from the same time last year.

Lurie attributed the declines to a continued rise in months of supply – from a low of three months in June to nearly six months in October.

“That sector is facing added competition from several new apartment projects, improved vacancy in the rental market and more supply in the attached sector,” said Lurie, noting months of supply in the sector
has remained above four since August.

“When combined with a steep pullback in demand, it creates conditions that generally favour the buyer.”

Aggregate prices in both the detached and attached sector also recorded both monthly and yearly declines, but were moderate compared to apartments due to less severe drops in absorption levels.

“In this type of market, both sellers and buyers need to have those hard discussions with their real estate professionals about their objectives,” said CREB(r) president Corinne Lyall, noting increased competition
from both the rental and new home markets.

“If sellers are serious about selling, they need to consider how they are positioning their home on the market. Buyers, meanwhile, have to consider whether that home satisfies their lifestyle needs.”

Overall, October sales in the city declined by 33 per cent year-over-year to 1,421 units, with year-to-date sales falling by more than 26 per cent.

Meanwhile, inventory levels during the month remained at 5,578 units, pushing months of supply up to 3.93.
Market balance in the detached sector, which accounts for more than 60 per cent of all sales in the city, varied depending on price segment.

More than half of detached sales in October occurred below $500,000, where demand relative to supply remained relatively tight – thereby potentially offsetting some of the price losses in the higher end of the
segment.

“Sales activity has varied depending on market segment and price,” said Lyall.

“For example, while some price adjustments have occurred in the higher-end detached category, this is less likely for the under-$500,000 detached segment, which had more balanced conditions.”

This site uses Akismet to reduce spam. Learn how your comment data is processed.

Find out what your home's worth Value My Home

What’s Your Home Worth?